According to the testimony recorded in the Gospels Jesus spent much of his time healing the sick and broken hearted. Often, he would lay hands on them or they would reach out to touch him with the hope of being healed. In the sacrament, we pray that the sick are healed in body, soul and spirit. God knows which of these areas needs healing.

Who can receive the sacrament?

Any person with a serious illness.
An elderly person weakened by advancing years and closer to death because of the illnesses to which he or she may succumb.
Someone getting ready for surgery.
A person with a chronic sickness that gets worse. This can also include mental and emotional disorders, alcoholism, drug addiction, spiritual illness.

People should request the sacrament early in their illness, not when they are about to die. Viaticum, holy communion for the journey, is the sacrament for the dying. If a sick person has already been anointed and the illness turns for the worse, the sacrament can be administered again.

Only a priest can administer the sacrament of Anointing of the Sick. If someone is in the hospital, health care facility or home and wishes to be anointed, Deacon Sandy Sites will attempt to make arrangements with a priest for the anointing.

When is the sacrament celebrated? 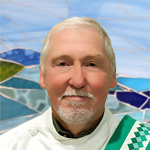